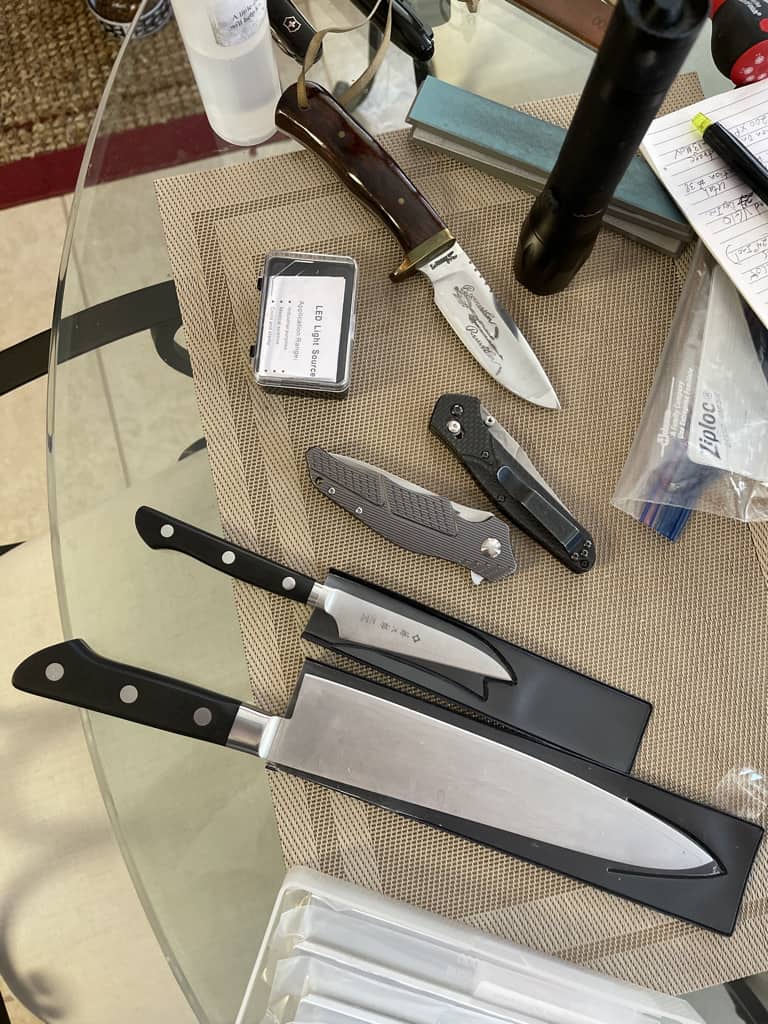 CAN YOU LEARN TO FREEHAND SHARPEN KNIVES?

Why Bother with Freehand Knife Sharpening?

There’s just something alluring about freehand sharpening an edge for many people. Freehand sharpening removes very little material which extends the life of your knife. It can be done quickly with minimal equipment, and you can sharpen knives almost anywhere there is enough light to see what you are doing.

Struggling freehand sharpeners wonder if buying more expensive stones will improve their freehand sharpening results. No. The answer is no, the best stones and awesome stone holders that money can buy do not compensate for poor technique. Better stones are worth it once you know how to put a sharp edge on a mainstream steel knife, but they won’t correct or compensate for poor technique. Most stones can sharpen most knives given enough time and good technique.

Dull edges are not generally the fault of the sharpening stones, though many people fail to use a coarse grit sufficient to reset the bevel on a badly damaged edge to save time. They tend to get impatient or bored because they aren’t getting a burr quickly enough. A coarser grit is all that is really needed in these cases.

Using a grit that is too fine success comes, eventually, with enough patience on even the least expensive abrasives. I hand-sharpened my Buck 440 SS folding and hunting knives for years on Wet/Dry Sandpaper and a thick piece of glass. My results were pretty respectable; they shaved arm hair. That was good enough for me at that time. Now, I demand more than that in most of my edges.

The Four Most Important Keys to a Sharp Knife Edge Using Freehand.

Within all successful knife sharpening, several skills matter, but four stand out most critical to achieving a sharp edge:

You’ve checked and verified the required angle to sharpen the knife. Whatever that angle happens to be, you know you must keep the knife at that angle consistently all along the blade from heel to tip at all times on both sides. This is easier for some people than for others. This is the benefit of using guided sharpening systems. They take care of the consistency for you. Once you’ve determined the angle, you must be very consistent at maintaining that angle throughout the process. Without angle consistency, you’re wasting your time.

Knowing how to apply more or increased pressure and when to lighten up the force used while grinding, deburring, refining and polishing is another important knife sharpening factor. Simply stated, how hard do you press down on the knife blade as you slide it across the abrasive? Or, conversely, how hard you press down on the stone as you slide the stone across the blade. This may be the toughest part for novice sharpeners to grasp via books and video instruction. In-person, it’s much easier to pick up on pressure used at each step while learning from another.

Reaching the apex – confirmed by at least a tiny burr along the entire length of the blade and on both sides of the blade. How do you know you’ve reached the apex? A burr is how you know you reached the apex. You learn to see and feel the burr instantly. As long as you raise a burr along the entire edge, heel to tip on Side A, it’s time to flip the blade over and raise a burr from heel to tip on Side B. Over time, the sooner you can detect and verify even the smallest burr, the less metal that needs to be removed which extends the life of the blade, and shortens time to sharpen your knife.

Properly removing the burr without rounding or destroying the apex is arguably the most important of all the knife sharpening skills. There are many techniques for burr removal. But no matter which technique, we’re string for the perfect apex. The acid test for new sharpeners is that you should be capable of removing the burr at the end of the very first stone used, no matter how coarse the grit; leaving a very sharp edge.

To accomplish successful burr removal you must learn to apply lighter and lighter pressure with alternating passes that ultimately grind off the foil edge or burr leaving nothing but an acute apex and as little remaining burr as possible. Failure to remove the burr will result in a knife that will dull almost immediately during first hard use. Many new sharpeners mistake the foil burr itself as sharp since it can fool you by cutting paper nicely. But, as soon as the poorly deburred knife sees a cutting board the knife will seem terribly dull.

Let these four skills sink in for a bit. ANGLE CONSISTENCY, PRESSURE, BURR, BURR REMOVAL. Commit them to memory. Commit yourself to master what each means, along with the interrelationships of each with the other three. Learn how to assess each for quality and behavior. Learn to recognize and verify the achievement of each requirement. One is not more important than the other. But the interrelationship becomes the foundation of a very sharp or keen edge that is also durable and up to the tasks intended.

Angle, Pressure, Burr, & Deburring Like Spokes in a Wheel; All Are Needed.

Assuming your abrasive whether natural stone, whetstone, sandpaper, cement sidewalk, diamond plate, ceramic rod, newsprint, or whatever is coarse enough and hard enough for the metal you are sharpening, you must understand and master the four skills above to achieve a usable edge. Each is like a spoke in a wheel. Fail at any of the four skills, and your wheel will wobble.

Frustration Guaranteed – Everybody Fails at Knife Sharpening at First.

If you have unsteady hands, I believe you can still get a satisfyingly sharp edge on your knife using freehand methods. But you will likely be very frustrated along the journey towards mastery. Just keepin’ it real. Freehand knife sharpening is not hard, but it’s precise. Many (most?) people don’t have the patience for precise. There are degrees of precision. Precise enough is excellent for most people in the kitchen or with their pocket knives and scissors. Some will want to take sharpening further, closer to perfection whatever that means. It’s important that you analyze and understand where things go wrong along the way as you sharpen using any technique or method.

You should be able to get a VERY sharp kitchen knife edge on a single coarse stone using each of the 4 skills previously mentioned. So sharp that the knife pull cuts very well through paper and easily shaves your arm hair. It will be a “toothy” edge because of the coarse abrasive, but it will be very sharp. This edge can easily slice even the ripest tomatoes quite thin after just using a coarse sharpening stone. If you cannot achieve this level of sharpness with the 1st stone in your progression, there is no point progressing to the higher grit stones since the 4 skills become even more important for success. Errors later will only round and dull your apex instead of polishing and refining your apex as it should.

I believe that you should own and use a fixed angle hand sharpener and master it before attempting freehand only on stones. Why? Well, fixed angle jigs should take care of 1) angle consistency for you. Now you only have to worry about the last three skills 2)pressure 3) Reaching apex on both sides [Raising a burr along the entire edge from heel to tip both sides] 4) Removing Burr properly.

The benefit of a fixed-angle sharpener is that it improves your odds of success obtaining sharpness. You need to know what a truly sharp knife edge looks and feels like when YOU do it. Fixed angle sharpeners help you by removing the angle consistency skill as long as you are using the device or jig properly. Can you still mess up? Heck yeah! So, you still must master the other 3 skills AND you need to use the device or jig with the correct angle. No free lunch here. So, assuming you’ve sharpened a few knives and know what that looks and feels like if you still want to try freehand sharpening, read on.

I always recommend that people get a respected but inexpensive whetstone or two to try freehand knife sharpening to see if it works for them before spending a lot of money. Freehanding with water or whetstones can be tested inexpensively by buying a combo stone. Personally, I believe you need at least a Coarse, Medium, and a Fine ultimately, but a Coarse/Medium is best to start IMO.

The King 1K/6K whetstones are popular if your knives are just dull but not chipped. Be forewarned that a 1K (medium grit stone) isn’t super-aggressive, if your knives are really dull or in bad shape, it will take a lot of strokes and patience. 1000 grit stones will sharpen almost any kitchen knife, eventually, but if the edge is chipped the 1K grit stone isn’t coarse enough to grind it out quickly. If you are the impatient type and your knife edge is chipped and in need of repair, a stone of 250-500 grit would be very useful when edges need to be repaired. Personally, I would rather have a 250/1000 grit combo since a 1K knife edge on a kitchen knife is what I use most of the time anyway for veggies and meat cutting.

Will You be a Good Freehand Knife Sharpener?

Is there hope for your freehand sharpening? Only you can say. I believe you can do it. Success will require more diligence with shaky hands. The tactile elements, such as how the knife feels [and sounds] as you’re sharpening only come with experience and practice. I consider it a relaxing, fun, and useful skill to have. I can now make an edge as sharp as I want on virtually any blade edge using any of several methods and materials. That’s liberating. It’s really cool.

link to Houston: A Dangerous Place For Pedestrians & Bicycles

Usually, I prefer to write stuff to help others by passing along some knowledge. This is more of an acknowledgement or rant with some background and hope sprinkled in. Sorry about that. As a...

After 55 years of accident-free riding all sorts of motorcycles hundreds of thousands of miles during my lifetime, I crashed. A person driving their car in the adjacent lane beside me suddenly...

I am interested in dang near everything! Music, Sciences, Art, Fishing, Kayaking, Motorcycles, HVAC, Electronics, Advanced Technology, Ancient History, Geocaching, Knife Sharpening, Knot Tying, Problem Solving, Management, People, Marketing, Advertising, Consulting. Here is where I share what I know and have learned. I hope it helps you.